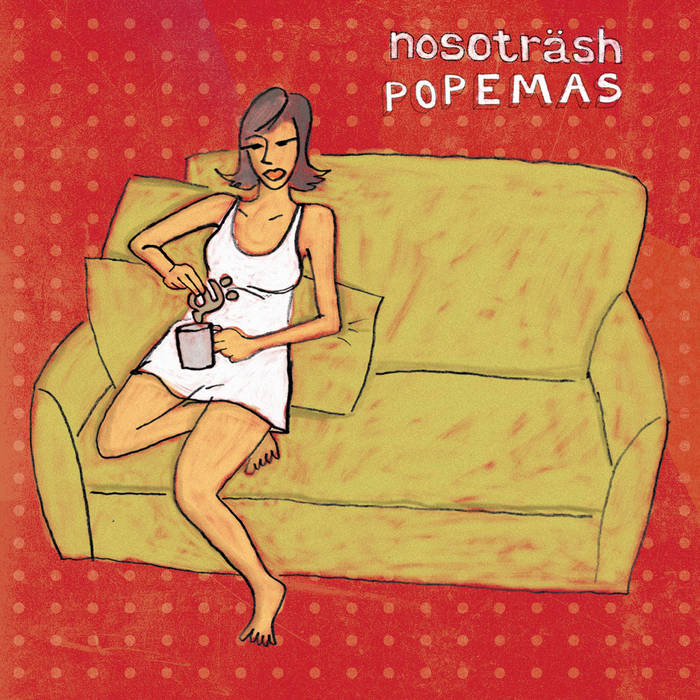 NOSOTRÄSH is a Spanish pop band formed by four girls: Natalia (vocals), Beatriz (guitars), Montse (bass) and Cova (drums) started to get known in 1996 with “Voy a aterrizar”. This song was an instant hit in Spain, going beyond the indie circles to get popular among all kinds of people. Two years later came the band’s debut album called “Nadie hablará de... Nosoträsh”. While most Spanish indie bands of that time made noise music and sang in English, NOSOTRÄSH offered a refreshing alternative by making soft-pop songs with beautiful melodies and very good lyrics in Spanish. By the way, the name of the band is a pun that blends the English word “trash” with the Spanish feminine plural pronoun “nosotras”.

In 2000 NOSOTRÄSH came back with their second album “Mi vida en un fin de semana”, released by Elefant and produced by Ian Catt, who had worked with an impressive list of bands and artists ranging from ST ETIENNE to MADONNA. This second album marked a very important stage in the band’s career, and was rewarded with highly praising reviews in most Spanish music media. The band toured the country in a long tour, including most summer festivals.

And now here is “Popemas”, NOSOTRÄSH new album. It goes to show not only how much the band has improved its songwriting skills, but also how these girls like to take risks and go beyond. A simple follow-up to “Mi vida...” would have been enough for many of their followers and press champions. But “Popemas” is much more than that, it has its very own entity, the band’s most personal work so far, a true tour de force.

“Popemas” is a blending of “pop” and “poemas” (poems). As the title implies the band has tried to mix both concepts but always avoiding pompousness and grandiloquence. The result is humble pop songs with very natural and sensitive lyrics, in consonance with the freshness and down-to-earth attitude the band has preserved from its early beginnings.

The lyrics in this album mark the unquestionable maturity of NOSOTRÄSH as a band. They manage to write about day-to-day emotions but in their very own way, something very few people had achieved in Spanish, like VAINICA DOBLE or LE MANS. Only they could describe a moment of maximum happiness in such a brilliant way as in “Ärte”, the opening number: “To sleep one hundred thousand hours and dream that you love me, to find you again next to me, to hold you in my arms again and have you for breakfast, that’s what I call ärt”. Words that sound much better when sung in Spanish by sweet Natalia, and accompanied by an elegant accordion and a subtle vals tempo. Another sample of the band’s exquisite writing can be found in “Gloria”, a list of alternatives for a boring afternoon that ranges from “making myself a dress with maps of all the places I’ve visited since you left me...“ to “having dinner with the waiter of our restaurant”. NOSOTRÄSH don’t need to talk about extravagant or weird things; on the contrary, their main value is to express daily feelings -the ones everyone can feel close to- in such a personal and unique way that ends up being new.

The music to go with these texts is a delightful catalogue of sweet pop miniatures, songs reduced to its minimal expression that rarely go beyond two minutes long: in most of them the first chorus closes the song instead of giving way to a new verse repetition. With a truly admirable capacity of concision the band gets rid of every superfluous element to leave alone the essence of the song, this done without losing the inmediate catchiness of it.
To achieve a sound different from their previous works, the band asked for the services of Ibon Errazkin: the ex LE MANS had already showed his skills as a producer with ANA D or CARLOS BERLANGA, and this time he has been a key element to manage that these “Popemas” sound really fascinating in their minimalism. Some of the songs are constructed only with vocals and percussions like “Gloria” or “Corazón-Colilla” (“Fag-end heart”). Ibon introduces some subtle electronic effects in others (“Agarradita”, “Por los restos”); he even plays guitar in “Cenicero” and “Ärte”; to sum up, he manages to give each songs exactly what it needs, avoiding the most obvious, trite solutions (strings, horns).

NOSOTRÄSH were helped by a big bunch of friends: Nacho Vegas co-writes “Tres tristes tigres” with Beatriz and sings it with Natalia, supplying a touch of bittersweet sadness, perfect to close the album. There are also contributions by Frank Rúdow (MANTA RAY, VIVA LAS VEGAS) on bongos and shaker; Luis Navarro (EDWIN MOSES) on guitar; PATRULLERO MANCUSO’s Murky on guitar and Guiller Momonje with many different percussions, including the bubbling effect of “Corazón-colilla” made with a metal sheet! In this song there’s a big chorus of friends, among others Jose Luis (MANTA RAY), Pedro Vigil (VIGIL, EDWIN MOSES, PENELOPE TRIP), or Eugenia Gancedo, who used to play bass in their early days of NOSOTRÄSH.

But of course the main characters of this album are the songs themselves: “Ärte”, “Agarradita”, the naked sadness of “Electrojeanette”, a very Northern and evocative “Sobre mi pecho un alud” (“An avalanche over my breast”)... A special mention for Natalia’s fragile vocals, which gets inspired by the subtle, delicate moods of the album, singing in a very moving and soft voice while offering a wider range of registers. Though as it is a very special record there is also room for the vocals of Cova (“Corazón-colilla”), Beatriz (“Cenicero”) and Montse (“Polilla”).

NOSOTRÄSH had already proved they could write catchy, fresh and memorable pop songs. But in this new album they go beyond by creating a collection of songs full of risk and sensitiveness, placing these four girls on the top of the current Spanish independent pop scene.